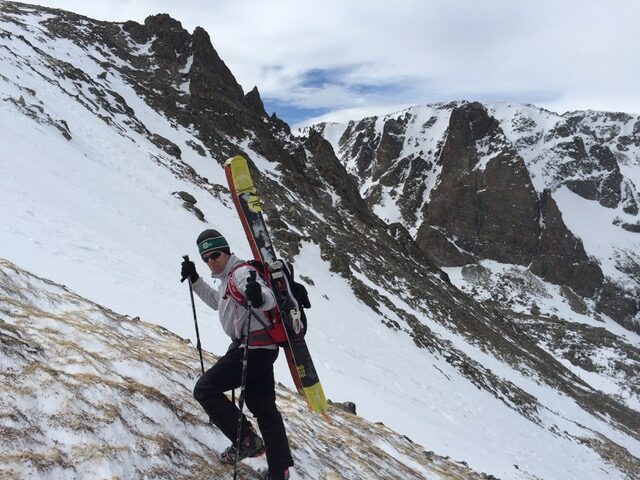 There’s a reason that Colorado is known as one of the ski capitols of the world. With a deep snowpack and hundreds of miles of backcountry, Colorado’s ski season lasts year-round for the most dedicated of backcountry enthusiasts. But for those who are looking to get out in May and June, they’ll find stunning high altitude lines, spring corn snow, and some of the best secluded skiing in the state. The weather is warmer, the snowpack has long settled, and we’re able to access higher peaks and more areas then before. It’s a great season to climb and ski the 14ers and some of the more technical lines in the state. Here is some of the best of late season skiing in Colorado.

Skiing the 14ers – Ski the Highest Peaks in Colorado

In the late season, after the snowpack has settled, skiers have the extraordinary opportunity to ski from the summits of some of the highest peaks in Colorado. Some of the most prized ski lines in the state, the 14ers offer a number of options from intermediate descents down the face to some of the most technical drops in the West. Skiing the 14ers requires the ability to ski on different kinds of snow, have knowledge of navigation and quickly changing weather conditions, and endure a long sustained day of uphill travel. Each of the 14ers has a particular line, some easier than others. Many will start their 14ers ski adventure on a more intermediate descent such as the face of Quandary Peak or Mt. Sherman, while others will opt for a more technical and challenging descent such as the Dead Dog Couloir on Torreys Peak or the Holy Cross Couloir on Mount of the Holy Cross.

One of the most beloved traditions for many Colorado ski enthusiasts is to ski Colorado’s perennial glaciers and snowfields, which based on one’s definition of skiing, last throughout the summer. Skiers will head to St. Mary’s Glacier, just outside of Idaho Springs, and with a short hike in, provides a quick half-day option for ski laps on corn snow in the spring and then challenging slush later in the summer. Other skiers will head to Skyscraper Glacier set just outside of Rollins Pass, with it’s 45-degree entry, one of the most challenging options for spring and summer skiing. This one-way towering snowfield drops into Betty and Bob Lake, with some of the steepest turns in the Front Range. Skiers who are in the park will get to ski on Tyndall and Andrews Glaciers. These two, coming off the slopes of Hallett and Flattop Peaks, feature superb skiing throughout the spring with fun laps. For those who are looking for a fun day out, the glaciers and snowfields of Colorado make for a great day of spring and summer skiing.

Colorado’s ski areas are legendary, but tucked between the mega-resorts of Summit County are a number of ‘lost’ resorts, that were closed and abandoned decades ago, but still retain a major part of the state’s history. These areas, such as Berthoud Pass by Winter Park, Geneva Basin in Guanella Pass, and Hidden Valley in Rocky Mountain National Park, were once thriving ski areas from the 1930’s as soon as 1991. While the heyday of these resorts have passed, their ski runs, cut into the trees are still open, meaning many backcountry enthusiasts will hike up from the bottom and then ski off the top, following the old runs back to the bottom. Capitalizing on the backcountry visitors that still visit these former resorts, many of these areas have installed beacon parks, where backcountry users can hone skills in practicing to locate avalanche beacons.

After the snowpack has settled, Colorado’s steeper territory opens up, with thrilling drops, and some of the best skiing in the West. Colorado’s couloirs, the notches that open up between the peaks, make for prime and thrilling lines that drop from the summit to the valley floor below. In Rocky Mountain National Park, skiers go for lines such as the Dragontail Couloir just above Emerald Lake or the famed Notchtop Couloir off Notchtop Peak. Other favorites include the Silver Couloir off Buffalo Peak in Silverthorne and the Cristo Couloir off Quandary Peak. The degree of steepness varies from 30 degrees to as much as 60, making these some of the most technically difficult lines in the state. One must have the ability to ski steep sustained lines for thousands of feet at a time and be comfortable making short and sudden turns. The couloirs are among some of the most prized lines in the state.