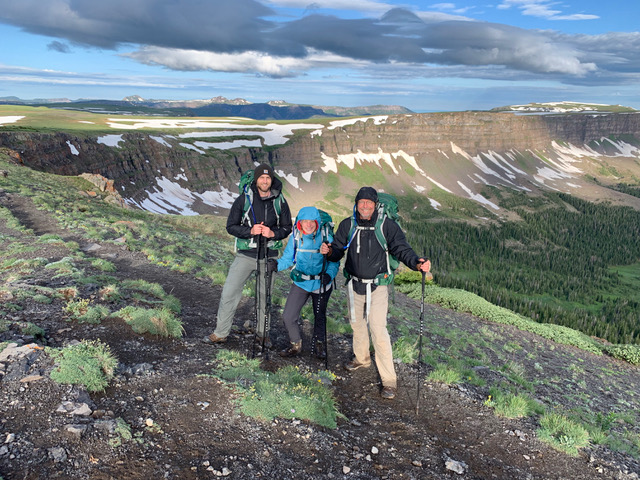 While the height of Colorado’s backpacking season is in the summer, backpacking in the late season reveals a special side to the state, with cooler weather, less crowds, spectacular scenery, and more campsites. It’s a great time to explore Colorado’s wilderness areas outside of Rocky Mountain National Park, and see areas of the state that few others who aren’t locals get to see. From the Indian Peaks to the Flattop Wilderness, there are options for every type of traveler. These are some of the best late season backpacking trips in Colorado.

Set just an hour west of Boulder, the Indian Peaks and James Peaks Wildernesses are so close to the city, but feel like world removed. Known and beloved to many locals, but relatively unknown to those from outside the state, the two wilderness areas, set around the spectacular Brainard Lake, feature an unforgettable mountain skyline, pristine alpine lakes and waterfalls, and wildlife such as black bear, moose, and deer. The Indian and James Peak Wildernesses are an excellent alternative to backpacking in Rocky Mountain National Park, with just as breathtaking the scenery and a quarter of the crowds. With trails meandering around the Continental Divide, there are options for those who want a lower trail that explores the many lakes and meadows, and those who want more of a thrill, climbing and traversing Colorado’s mountain ranges.

The adjacent James Peak Wilderness, set around the titular peak, features it’s own land of lakes and mountains, with wonderful fly fishing, thrilling mountaineering, and trails that weave for miles through forested groves, woodlands, streams, and high alpine environments. This is a great way to explore Colorado at it’s best!

This magnificent landscape of red rock mesas, rising high above the river near Steamboat Springs, is one of the most unique wilderness areas in Colorado. Featuring rushing streams, lakes, open prairies, and a plethora of wildlife and fishing, the Flat Tops Wilderness will thrill all types of hikers.

The beauty of the Flat Tops Wilderness is the dispersed camping options, which allow us to camp where we like, while adhering to Leave No Trace principles. For hikers, there are iconic trails such as the Chinese Wall and Devil’s Causeway, which soar high above the grassy prairies and rivers of this sub-alpine wilderness.

The fly-fishing in the Flat Tops Wilderness is tough to beat, offering a variety of trout fishing, and searching for some of the most rare trout species in the Western United States. We’ll get to explore several different streams and lakes, getting to fish from well-stocked natural waterways, in a serene and spectacular setting.

For an entirely different kind of adventure, take a trip on the Upper Colorado River, and enjoy one of the greatest splendors of Northern Colorado: a red rock canyon, open prairies for miles under a mountain skyline, and the relics of Colorado’s gold mining age. The Upper Colorado River combines the best of Colorado: hiking, whitewater rafting, and sightseeing across one of the most scenic and wild landscapes in the state.

We’ll start at the put in point at Radium or Pumphouse Campsites and travel through the canyon, crossing between sections of rapids and flat water. Much of the charm and the attraction of the Upper Colorado River is not as much what’s on it but more of what’s on the side. With opportunities for swimming in the river, exploring caves, cliff diving, and delving into the Radium Hot Springs, there’s plenty of entertainment along with the gorgeous plains stretching all the way to the mountain skyline rising high above the red rock alpine desert.

The crown jewel of Colorado’s wilderness space is Rocky Mountain National Park, teeming with wildlife, majestic scenery, alpine lakes and waterfalls, and some of the most unforgettable backcountry campsites in Colorado.

From high alpine summits, to exploring the lakes, rivers, and experiencing some of the best and most secluded fly-fishing in the state, Rocky Mountain National Park has something for every hiker, from the very beginner to the ambitious and experienced.

In the late summer and early fall, it’s easier to explore the park, with less crowds, cooler temperatures, and the promise of spectacular late-season and early fall color. It’s a great time to see the last of the summer wildlife before they hibernate for the winter, including moose, black bear, deer, and elk, which are in their bugling season, where the elk call is heard calling for it’s potential mate. It’s one of the most unique natural wonders in Colorado.

There’s rarely a better time to be backpacking in Colorado than the late season. With the fewer crowds, cooler temperatures, and plethora of wildlife, it’s a great time to see Colorado in a way that few others get to experience. Call 720 242 9828 to book your adventure today!