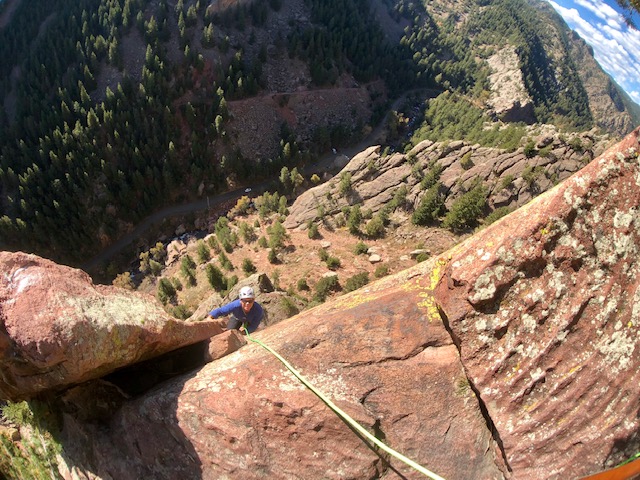 Eldorado Canyon State Park is where American rock climbing was born in Colorado. In the 1950’s and 1960’s, climbers were flocking to this little corner of Colorado to put up some of America’s most daring first ascents. In the 1970’s the scene exploded, as protection and gear became more widely available, and rock climbers from all over the world came to develop thousands of routes, some of which are America’s hardest. While many of the routes here are considered ‘moderate’ by modern standards, the grades are a tease, since these routes were developed before the modern grading scale. Thus, even a ‘5.7’ feels like the burliest 5.7 of your life.

For climbers who are looking to take their ascents to the next level, Eldorado Canyon is the ultimate proving ground, with thousands of routes lining the walls, from introductory to cutting edge. Here are some of our favorite classic climbs of Eldorado Canyon.

Six pitches and one of the most classic pitches in the universe, Rewritten is an Eldo legend, featuring everything that makes Eldo climbing great: Chimneys, arêtes, cracks, exposure, traverses, and airy dihedrals. The various Rewritten pitches also offer plenty of variation for intermediate climbers. Rewritten also features thrilling exposure over the arête and the traverse pitch and views overlooking Eldorado Canyon. Rewritten is one of the premier beginner multipitch routes in the Canyon.

The Yellow Spur is one of the most revered routes in Eldo, featuring six pitches featuring dihedrals, cracks and a thrilling 5.6 arête to the summit. The first pitch resembles a burly boulder problem but the rest of the climbing is straightforward and well protected with sections of corners, roofs, and thrilling crack systems. With variations that add to the difficulty, Yellow Spur is a favorite of even the most veteran Eldo climbers. The money pitch is the photo worthy arête that leads to the summit of Tower One.

Ruper offers long sections of moderate climbing, in many different styles, on six exceptional pitches that offer a number of variations for difficulty. Ruper is separated into two sections of three pitches each, with the opportunity to rappel off a bench after the first three. The route features a mixture of face and crack climbing, with airy traverses, dihedrals, and a run out but exciting 5.5 exposed pitch to the summit of Tower One.

A great ascent to take a first time Eldo lead climber with lots of variation, cool pitches, fun moves, and an overall great day out. There are three variations for the start, following the same route as Rewritten, the Great Zot, or West Chimney, with start moves ranging from 5.6 to 5.8+. The pitch follows up its namesake arête, with fun moves on blocky holds leading to thin, easily protectable cracks, and a cruxy dihedral to the summit. One final corner climb leads to the summit, with a great view over the canyon and a couple rappels to the bottom.

Wind Ridge is the quintessential introduction to Eldo climbing, with four cruisey pitches of fun, blocky face climbing, mild exposure, and great protection, offering the most minimal taste of what the climbing is like here. After starting up a big flake, the climbing goes onto the face before entering a small alcove at the end of the second pitch. From the alcove, climbers make a twisty gymnastic move onto another flake and then take the fun last pitch to the summit of Wind Tower. From here it’s a short hike and rappel to the bottom.

The Bastille Crack is the absolute and undisputed classic of Eldorado Canyon. Climbers come from all over the world to try it. Once you enter the canyon it’s one of the first routes immediately to your left, starting right off the roadway. The north- facing wall is in shade most of the day, making it wonderful for spring and summer climbing, but climber Jim Erikson famously said avoid it like the plague if the weather is not warm or you’ll shiver most of the charm off. The Bastille Crack starts immediately with its famous splitter line, which takes careful placement by the leader to navigate. The climb then continues with a chimney pitch, a roof traverse, which makes up a main bulk of the crux, and a number of sloping ledges. The second to last pitch starts with an airy traverse to a corner and then up a last moderate pitch to the summit. From the summit it’s a walk-down to the road. If there could be only great moderate climb in the universe, it would be the Bastille Crack. Climbing this route with one of our professional climbing guides – check here.

Famously named by climber Jim Erikson, who did the first ascent free solo in 1972, Blind Faith is notorious for it’s burliness. Starting just off the side of the Bastille, the route starts with a hand and fist crack that goes to fingers and becomes progressively overhung to where you can’t see the top, hence the name. The first pitch ends at a large ledge and then starts up the burly chimney pitch to the top. The chimney pitch is both one of the most loved and feared pitches in the canyon, with a deceptively overhanging block and plenty of protection, but you’ll find yourself heartily grunting through every step of the pitch.

Starting from the first pitch of the Bastille, Outer Space is steep, exposed; in some places scary, and leaves you feeling like you’re floating. After the first 5.7 pitch, climbers swing over a bulge and get into a stem in a steep dihedral, long revered as one of the best pitches in the canyon. Climbing to a cruxy undercling, and then up another crack for 60-feet, there are good rests between 5.9 moves. The crack then leads to a blocky section that leads to the top of the Bastille. You’ll thrill at the exposure and the wonderful, varied climbing.

Hairstyles and Attitudes 5.12b / 1 pitch

More a Bastille variation, Hairstyles and Attitudes runs next to the last pitch of Outer Space, and features some of the most technical lines in the canyon, including thin fingers, knee locks, precise, intricate movements, and thinly balanced moves. While it’s tough and exposed, it features good protection, and is the best testpiece for the hardest and most technically skilled climbers. The route starts up the first pitches of the Bastille and then moves over to a right facing crack that soars to the summit. Hairstyles and Attitudes is one of the most technically challenging pitches in the park.

The Naked Edge is so famous that it’s spawned a Boulder speed record race to the top. This Eldo mega-classic features slabs, thin hands, dihedrals, chimneys, and a spectacular overhanging 5th pitch hand crack to the top, with over 600-feet of exposed air under you. The moves are intricate, precise, and technical, with some mild spiciness but good protection. The pitches are approximately 80-90 feet in length, with some runout sections and some high stepping moves before moving into the crux sections. For those who are looking for one of the most classic hard climbs in Eldo, the Naked Edge should be at the top of everyone’s must do list.

Eldorado Canyon is a perfect day destination for visitors to Denver and Boulder Colorado. For those of you that would want to hire a guide or to expand your climbing knowledge with a professional rock guide, please contact us for guided Eldorado canyon state park rock climbs at 720-242-9828.