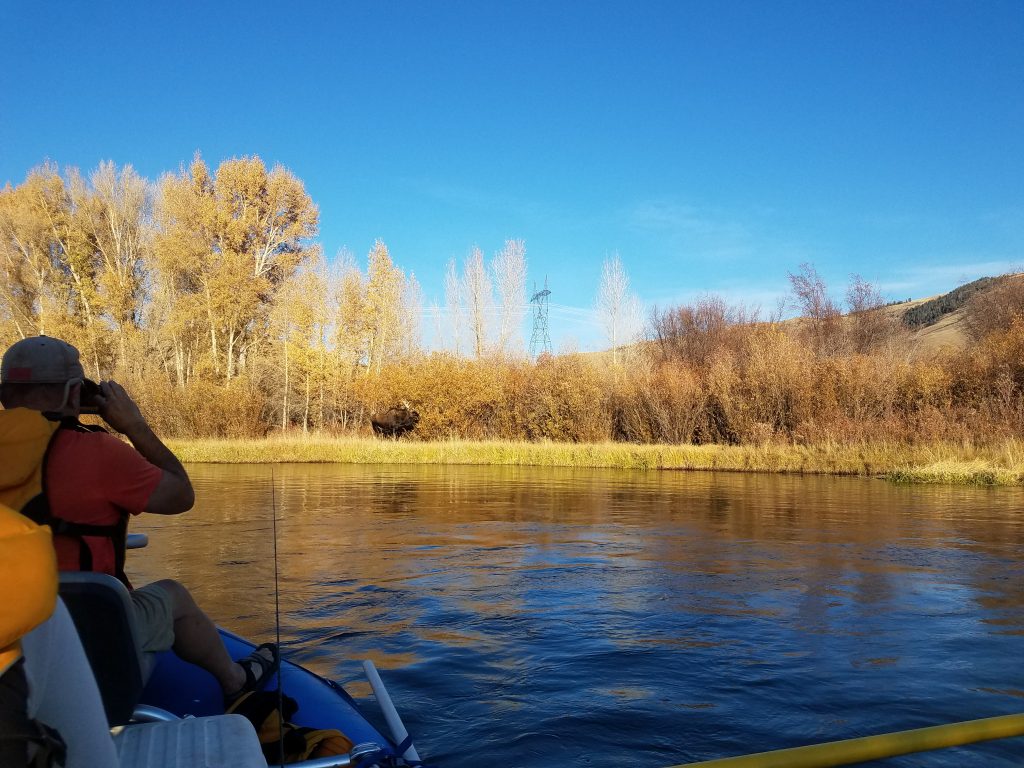 An Insider’s View into a Multi-day Fly Fishing Float Trip with Colorado Wilderness Rides and Guides on the Upper Colorado River.

“Joshua Baruch started the Colorado Wilderness Rides and Guides business 10 years ago, I think in the words of Joseph Campbell to ‘follow his bliss’.  I was lucky enough to be included in a three day retreat on the Upper Colorado River with the management team, and it was unlike any retreat I’ve ever participated in! I really enjoyed getting to know Josh, whom I see as equal parts visionary, humanitarian and river rat, and I got to see up close and personal what his vision of team building in the wilderness can look like – and in retrospect, how effective it can be. 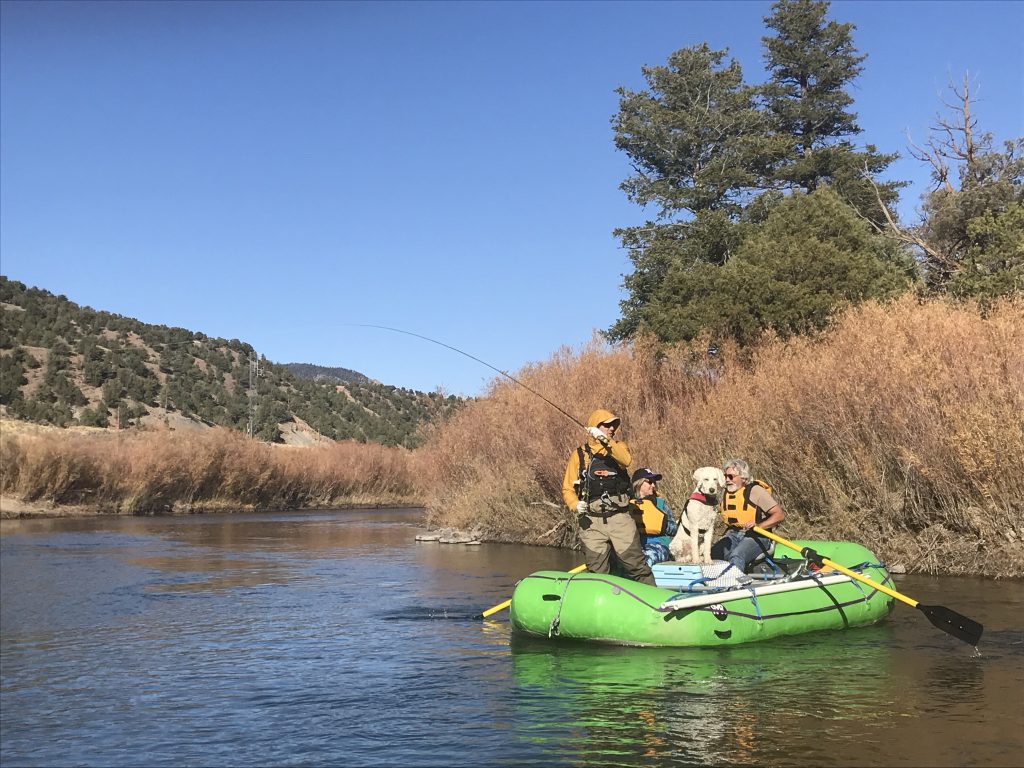 Josh took his team and me as a lucky plus one to a part of Colorado I had never experienced before, and we all reveled in the pristine beauty of the high desert country while rafting on the Blue and the Colorado Rivers.  I had had a little bit of experience rafting before with a church youth group and had even done a little white-water rafting with some of the Colorado Wilderness Rides and Guides (CWRAG) crew earlier this year, but nothing compares to the experience we shared rafting and fishing these two beautiful rivers during the company offsite retreat. 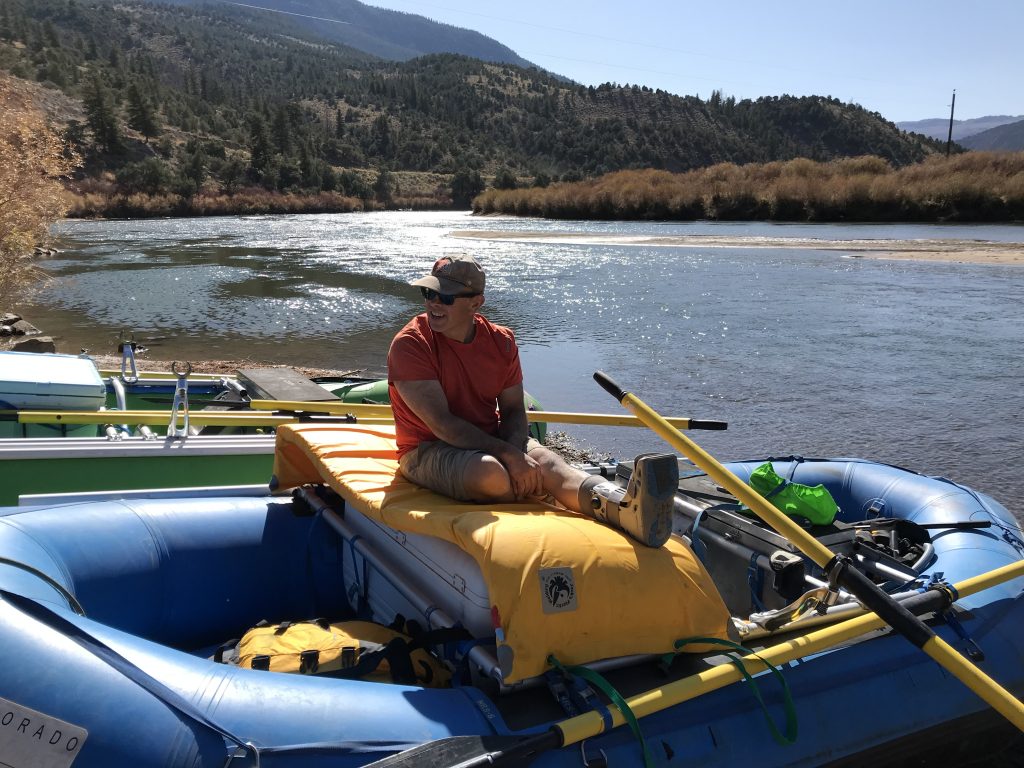 I’m still playing the movie over and over in my head of all the thrilling and unique experiences that can be packed into three days with a group of talented, dedicated and intuitively compassionate guides.

First of all, it was fascinating to witness how much work goes into fitting up a boat in preparation for a day of trout fishing, a subject I’ll address later.  The attention to safety and detail, and the planning for how to optimally utilize the boat, were fascinating.  It was equally cool to watch these pros calmly discuss strategy and tactics, and then lower two boats down a 100 foot wall behind a dam so that we could launch our group into one of the most breathtaking canyons I’ve ever seen.  Yes, Colorado is beautiful, and this is a major gem in a treasure trove of spots that Colorado Wilderness Rides and Guides uses to teach various skills, provide people like me with the thrill of their lives, and reflect the values that I saw in this Team as we bonded, including a reverence for the Earth, which is a big one for me. 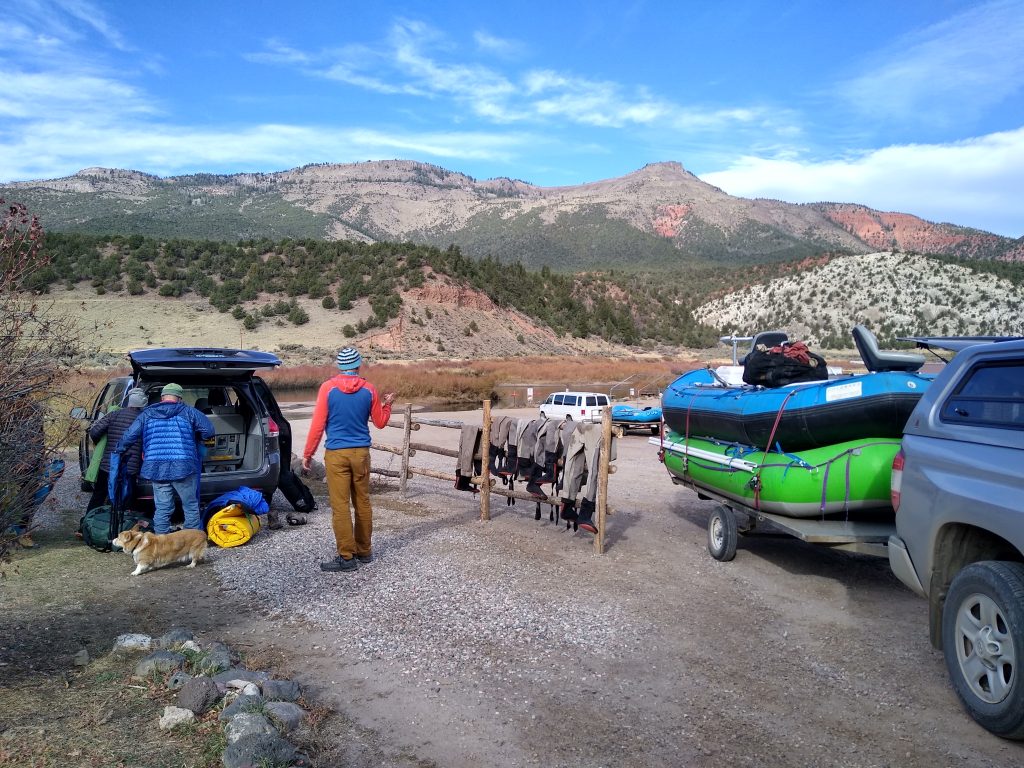 Prepping equipment and crewing on the river as a team.

We learned to row in the rapids, saw nature in all its glory, including mountain goats, bald eagles, red tail hawks, and even a young bull moose calmly grazing on the shore as we drifted by!  Oh, and we fished.  True confession time – I had never fished before, and actually wondered what the hell people see in it as a pastime.  How ironic that my appreciation for the sport was gained on what is arguably one of the best trout fishing rivers in the lower 48 states, as I was repeatedly reminded not only by my guides, but also by witnessing the other SERIOUS anglers on the water that day.

Once again, it was amazing to watch the attention to detail as the rods were prepared (I’m not even going to try to use some of the unique terminology of this sport as I describe it) and handed over to those of us who wanted to try fishing, including my wife Joan, who caught her first rainbow trout ever!  I tried it a few times and was surprised at how difficult it was, when it looked so damn easy.  I was eminently content to sit back and observe nature in all her glory, though…

I also gained an appreciation for the sport by asking a hundred questions, which the guides patiently answered, and also by watching the ‘pros’ among us (Josh, Dexter and Tom) fishing and REALLY getting into it.  Their excitement was contagious, especially when they caught a fish.  Dexter caught a rainbow that he said was one of the most beautiful fishes he had ever caught, and his joy at that victory was equally contagious.  I also admired the reverence these guys had for the fish itself, carefully removing the hook and placing it back in the water as soon as possible (after the picture, of course!). 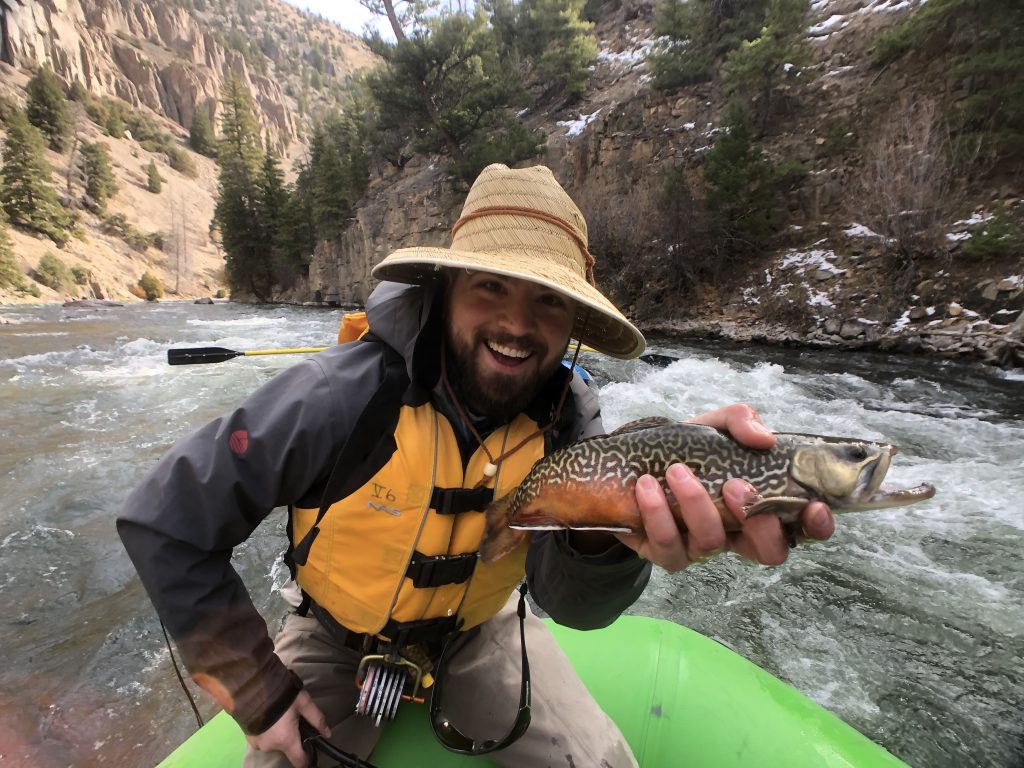 Finally, I gained a much greater appreciation for the power of The River – any river.  I shared an experience with two CWRAG Teammates (Chelsea and Nicole – I am taking the liberty of including myself in the Team after this one) that got our hearts racing to be sure, and we faced danger (I loved it), but in the face of that, the three of us did not panic – we just did what had to be done to free the boat, do the repairs, and rejoin the other boat, which had stopped and was working its way back to us.

I’m running out of superlatives, so I’ll just say I had one of the greatest adventures of my already quite full life with these badasses (and I say that with great admiration).  Thank you, Josh, Tom, Chelsea, Nicole, Dexter, Heidi, and of course my awesome wife, Joan.  Let’s do it again soon, OK?  I’ll even cook again…”