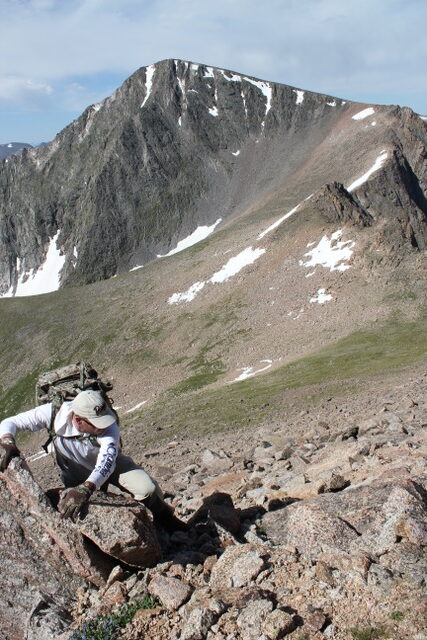 The wildest of adventures in Colorado are also the longest and most complex days. Colorado’s peaks, while spectacular in their own right, are interconnected with magnificent ridges and traverses that add an additional challenge, sense of excitement, and longer days in gorgeous high alpine terrain. From the Grand Traverse across Boulder’s peaks, to high crossings of fourteener peaks such as Mt. Bierstadt and Mt. Evans, getting to hike a ridgeline between two summits is a great way to add extra thrill to a day of peak ascents and summits. Here are some of our favorite traverses and multi-peak days across Colorado.

Colorado’s landscape explodes when it hits Boulder. Long flat plains suddenly give way to a spectacular skyline of peaks and trails that take hikers high above the city, in an end-to-end traverse that’ll explore some of the most famous high summits in the city. The Skyline Traverse is a 16-mile trail that starts at South Boulder Peak and runs all the way to Mt. Sanitas on the north end, traversing South Boulder Peak, Bear Peak, Green Mountain, Flagstaff Mountain, and ending on the summit of Mt. Sanitas. The climb starts from the South Mesa trailhead and then climbs steeply through the forest to reach a junction between South Boulder and Bear, where hikers can ascend one then come down and reach the next. From Bear Peak, where there’s a magnificent 360-degree view overlooking the City of Boulder, and then the trail heads down to a saddle between Bear Peak and Green Mountain, traversing wooded forests and lush meadows, with occasional open spots, which overlook the city.

After Bear Peak, we’ll head over to Green Mountain, where at the summit we’ll have a spectacular panorama of the Continental Divide, from the Indian and James Peak Wildernesses all the way through Rocky Mountain National Park and Longs Peak. From Green Mountain, we either have the option to descend to Chautauqua Park or continue to Flagstaff Mountain and then back down towards Mt. Sanitas, ending at the famous rod as we get a view looking back towards the Flatirons. This is one of the most classic routes in the city, ascending over 5,000 feet and featuring some of the best hiking in the city.

On a clear day from Boulder, you can see the Arapaho Peaks rising gracefully above the mountainous skyline that lines the city. Part of the Indian Peaks Wilderness, the 8.3-mile traverse from South to North Arapaho Peak, gains about 3,500-feet, with most of the route travelling above 13,000-feet. The route crosses numerous sections of Class 3 and Class 4 terrain, climbing over boulders and steep sections, including several steep ledges. The South to North traverse will take hikers across challenging terrain and two of the most classic peaks in the Indian Peaks Wilderness with overarching views of Boulder and Denver from afar and a magnificent mountain landscape stretching far in the distance.

Hikers start at the Arapahoe Pass Trail and pass the remains of the Fourth of July mine as they steadily climb uphill through forests to a subalpine basin under the peaks. From here, hikers begin a climb up a series of ledges as they make their way toward the summit of South Arapaho, following rolling terrain, which begins to steepen into Class 3 and Class 4 climbing.

After summiting South Arapaho Peak, hikers follow cairns to a ridge and take a series of complex moves to reach the summit block of North Arapaho Peak. From North Arapaho, with the famed snowfield between the two peaks, we have a unique opportunity to have crossed two of the most famed peaks in the Indian Peaks Wilderness, and a true Colorado mountaineering classic.

One of the most classic ridge traverses in the Front Range, the Sawtooth Traverse is a Class-3 scramble that starts at the summit of Mt. Bierstadt and traverses from south to north to the summit of Mt. Evans, across rocky moraines, exciting exposed walls, thin, knife ridge-like crossings, and spectacular views looking across the valley.

Hikers start from the Guanella Pass Trailhead, climbing the Class-2 trail to the summit of Bierstadt, following switchbacks to the top where they’ll have grand views of the surrounding mountains and landscape. From Bierstadt, the route stars tracking north dropping down onto a rocky ridge and then crossing through steep Class-3 and Class-4 walls, and thin notches.

Hikers then cross to thin trails on the other side of the ridge and then hike up loose talus to the top of the Sawtooth, where the ridge trail meets the meadow between Bierstadt and Evans. Hikers then follow a non-descript path through the meadow to meet the main trail with Mt. Evans, and then climb alongside the boulders of the trail to meet the summit hut at the top of Evans, where it’s only short scramble to the true summit. From here, hikers look across Clear Creek County all the way to the City of Denver, and mountain goats frequently frolicking around the summit house at the top.

Hikers have several options from here. Either take a car shuttle back down to the Mt. Evans trailhead, or retrace the trail through the meadow and then back down through a loose-rock gully to a willow-lined trail below, before meeting the main Guanella Pass trail that leads back to the parking lot. Taking the longer trail that meets back from the Bierstadt trail rounds out a tough but wonderful day in the mountains.

The Mummy Range Traverse explores one of the most remote and northern districts of Rocky Mountain National Park, spanning six peaks above 12,000-feet, 16 miles, and culminating in 5,600-feet of vertical gain. The trail starts at Hagues Peak and traverses Mt. Chapin, Chiquita Mountain, Ypsilon Mountain, Fairchild Peak, and Mummy Mountain with options to hit Rowe Peak and Rowe Mountain from the summit of Hagues. The trail is rugged and boulder-strewn, involving sections of Class-3 and Class-4 climbing across particular sections.

Because of it’s northern placement in Rocky Mountain National Park, the Mummy Range traverse is remote and one of the sparsely visit areas of the park, with an average car to car time of 12-14 hours above 12,000-feet. Much of the hiking occurs on loose talus and rock, plus unclear trails where hikers use good route-finding and intuition to move from one peak to the next. Hikers will get great views of several alpine lakes and a look at the Desolation Mountains to the east.

Hikers will then come down the other side to the Lawn Lake Trailhead and meet a car shuttle that will take them to the main trailhead on the other side, which will conclude one of the most classic mountaineering routes in Rocky Mountain National Park. Call 720-242-9828 for guided Colorado Scrabbles and Peak Ascents.

Sixteen Must Do (5.5 and 5.6) Boulder and Estes Park Rock Climbs

Give the Gift of Adventure This Holiday Season