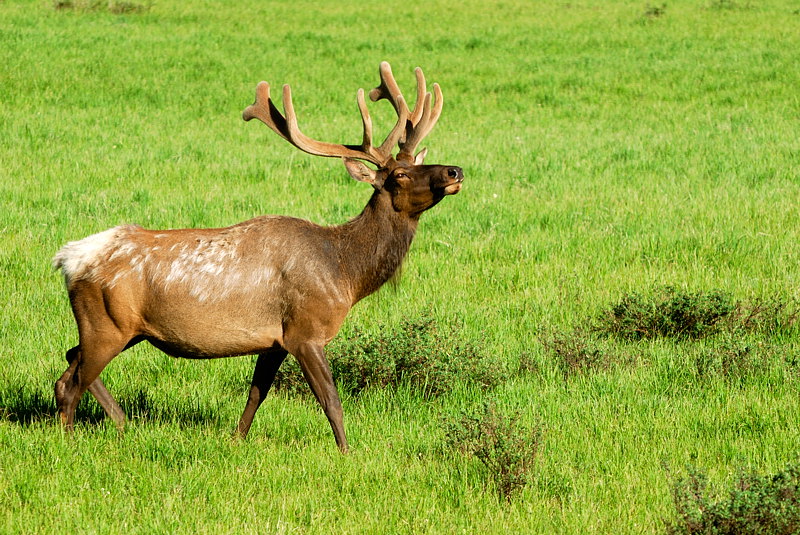 One of the most iconic and majestic sights and sounds in Colorado is the season when the male elk in Rocky Mountain National Park and beyond stake their claim for female companionship, in a delicate dance of physical dominance and audible strength. Elk rutting and bugling season is when the horns clash and the males attempt to dominate and earn the right to mate. Bulls become particularly aggressive and release powerful pheromones, while displaying their muscular antlers, necks, and bodies. While the bulls become very physical with each other, actual fighting is not common, as the bulls are looking to avoid injury and conserve energy for the winter ahead. While this mating dance looks intimidating, it’s a annual tradition for the elk, and one that is cherished by Coloradans as the arrival of fall. This is a guide to understanding the elk rutting and bugling and how to best enjoy this show of nature.

The distinctive sound that the elk use to call to each other is the sound that has defined the elk. A high-pitched squeal gives way to a guttural low rumble as the male elk use either to defend their harem of females, or to make themselves appear bigger and more attractive to prospective mates. It can also be used to recall the females if it appears that they are straying too far from their bull. According to Rocky Mountain National Park, the bugling is also a way to help the elk relieve tension, while also emitting musky pheromones that attract the best of the females. When watching the elk, visitors may be able to see between 300 – 600 males vying for the female attention.

The highlight of the elk bugling season is the rutting, where the elk lock horns in a powerful display of dominance to fight off weaker males, protect their pride, and demonstrate superiority to attract a more enticing female. While fighting is rare to conserve strength and energy, the elk will frequently rub their antlers against trees and against the ground in order to appear more aggressive and intimidating to other males. Fighting is meant to be a show of strength, not a battle to the death, but many of the mature males show signs of scarring and injury, especially if the horns lock especially tightly. A younger male is more likely to turn away from the larger and more experienced, but it’s not uncommon that two larger and more experienced males may try to stare each other down.

While the elk fight amongst themselves for dominance, they are also looking to attract the best females. Elk will typically douse themselves in urine-soaked mud to wear a ‘perfume’-like scent. It acts like a cooling agent and then covers the bull in a powerful scent that evenly coats the body. This makes the bull appear more imposing and also steers away the younger bulls who might make a try for dominance.

The ritual plays out in Rocky Mountain National Park each fall starting in mid to late September and continuing through late October, when the cold winter weather forces the elk to disperse. The best way to view the elk is in the early and later times of the day, as the elk prefer not to overheat. The elk are agitated at this time and are looking to impress mates, thus they are more aggressive in nature and it’s best to view and enjoy them from a safe distance, and especially never interfere between a mother and calf, or get in between an already moody bull.

The elk are usually hanging out together in large groups in the open prairies and meadows of the park, but it’s not uncommon that large herds will branch out to urban areas. Once you start hearing the scraping and bugling, the sound is unmistakable, leading to being able to find the herds together.

A guided tour with Colorado Wilderness Rides And Guides is one of the best ways to explore this unforgettable fall ritual. We go to the valleys and get ahead of the crowds so that we can view the elk from a close and comfortable but safe distance. To hear the elk bugle and to see them lock their horns in a show of strength is a quintessential Colorado experience.

Unrivaled Winter and Spring Sightseeing from Denver and Boulder